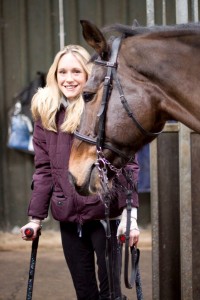 I have recently completed a film for Emily Skerrett a local Dressage rider who is busy competing and being a mother with the added difficulties of coping with severe disabilities.

It has been a really interesting project and I have found myself volunteering to help her achieve her goals in Para Dressage and the Paralympics.

I first met Emily at her training stables at Lakefield Equestrian Centre. Although strikingly beautiful and smiling, I could see she was having trouble walking with her sticks and seemed to be in some pain. We slowly walked to the stables to meet her friend and partner Woody and she gave me a brief history of her problems and aspirations. Describing her disabilities was  kept to a minimum,  she became more animated as she talked about her love for competitive riding.

Woody was asleep when we reached the stable, but he soon woke up when he heard Emily’s voice and slowly stood up carefully so as not to brush his owner. His size and strength were really manifest in the stable, and he towered over Emily. A deep chestnut brown, his muscles quivered as I was introduced to him.

Later I watched Emily compete with Woody, the nuances and skills of dressage were a little lost to me. But I was amazed at the cooperation they had. It seemed subliminal and effortless, Woody’s great strength and Emily’s concentration and skill were mesmerising. She seemed freed from her difficulties on horseback. Slim, delicate and in pain on her own, with Woody she became determined, strong and tall.

I finished the film for her, and have been helping set up a fundraising team to get some sponsorship. Once Emily embarks on the next phase of her plans she is going to have to enter several national and at least one international event. The transportation costs alone are very expensive and the funding will go towards this and other competition costs. Being picked for the UK team will allow  sports funding,but in the meantime her team are searching for £10,000 in funds and sponsorship to get her to the competitions.

Emily has Ehlers Danloss Symdrome. It is an inherited condition that affects connective tissue, tendons and bones. She has severe impairment of her right leg, and has constant trouble with dislocations. She has recently had an arm and wrist fusion to help with mobility. Walking is very difficult, she can use sticks but more often has a wheelchair to get around.